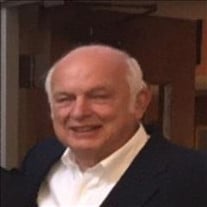 Stephen Jeffery "Steve" Olsen passed away peacefully on Monday November 30th 2020. Steve came into this world on January 19th 1941 in Glen Ellyn, Ill. To Rosemary and Roy Olsen. Steve had an older brother Don. Steve graduated from Cascia Hall High School in 1959 and attended and graduated from OU with a degree in Architecture and a member of Phi Delta Theta Fraternity graduating in 1964. He married his High School sweetheart Patricia Boerner in 1964 and the two were married for 52 years. Steve was a Captain in the U.S. Army Corps of Engineers. He served two and a half years during the Vietnam War in Frankfurt, Germany and was honorably discharged. Steve volunteered throughout his life with Catholic Charities, the Church of Saint Mary, Board Member with Hillcrest Health Systems, Tulsa Regional Medical Center and The Center for the Physically Limited. Steve was very active in the Tulsa Community as a member of AIA Eastern Oklahoma Chapter, Kiwanis Club, Toast Masters TIP Club, National Trust of National Preservation and the Military History Museum in Broken Arrow. Steve was the co-founder, with Roger Coffey, of Olsen/Coffey Architects. Steve and Roger ran their successful business for 40 years. Steve also obtained the NCARB registration for Architecture Steve's passion was to help people in need any way possible. He loved spending time with his family, grandchildren and pets and visiting his neighbors of 52 years the Niver Family. Steve was an avid golfer, but is one true love was always his wife Pat Olsen. Steve is survived by his children Mark, David and Kirstin. His Grandchildren Grant, Madeleine, Jack, Corbin, Camden, Adam, Eric and Jacob. Nieces Megan, Monika and Sara. Sister in law Margaret Boerner, step sister Liz and daughter Nadia, step brother Robert. Funeral services will be held 10 a.m. Friday December 4th, at Church of Saint Mary, 1347 E. 49th Pl. Tulsa. Memorial contributions may be made to Catholic Charities, 2450 N Harvard Ave. Tulsa, Ok. 74115 The funeral will be live streamed online at https://www.youtube.com/c/ChurchofSaintMary/live

The family of Stephen Jeffery Olsen created this Life Tributes page to make it easy to share your memories.

Send flowers to the Olsen family.