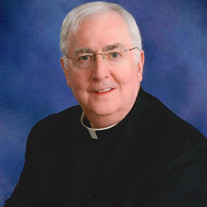 The Reverend Thomas Robert Dowdell Priest of the Archdiocese of Oklahoma City On November 6, 2020, the Reverend Thomas Robert Dowdell died after a long illness, having fought the good fight. Father Tom was accompanied by his loving family who witnessed his deep faith in the Lord Jesus Christ, his enduring hope in the Resurrection, and his intense gratitude for a blessed life. Thomas Robert was born in Roswell, New Mexico, on April 20, 1945, to the late Thomas Philip and Jean (Pickett) Dowdell. Their Catholic faith was shared with him through the Sacrament of Baptism celebrated at St. Peter Catholic Church in Roswell, on May 6, 1945, only days after his birth. The Thomas Philip Dowdell family would then move to Tulsa, Oklahoma, to join other members of the extended family. Thomas would complete the Sacraments of Initiation with First Communion on May 11, 1952, and Confirmation on May 15, 1955, both at the family's forever parish, Christ the King Catholic Church in Tulsa. Thomas was brother to Robert, who died in infancy, Jean (Arnold) Junger, Richard (Noreen) Dowdell, and Judge John (Rochelle) Dowdell. With their parents, they created a most loving family. They enjoyed the formation of Catholic education at Marquette School and Bishop Kelley High School. Following the inspiration of his uncle, Father Robert Pickett, a priest of the Diocese of Oklahoma City -- when the entire state was one diocese -- and with the witness of the religious and lay teachers at the Catholic schools, Thomas discerned a vocation to the priesthood. He attended St. Francis de Sales in Oklahoma City and Conception Abbey and College Seminary in Conception, Missouri. After completing college seminary, Father Tom was sent to Assumption Seminary in San Antonio in August 1967 to begin his graduate theological formation. This formation period led to his Ordination as a priest of the then Diocese of Oklahoma City on May 21, 1971, at Christ the King Catholic Church in Tulsa by Bishop Victor Reed. Soon after his ordination the Diocese of Oklahoma City was divided into two parts, the Archdiocese of Oklahoma City and the Diocese of Tulsa. Father Tom, stationed in Oklahoma City at the time, became incardinated in the new Archdiocese of Oklahoma City automatically. Father Tom has been ordained for 49 years. He has joyfully served as Associate Pastor at Christ the King Church from 1971-1973, at St. Francis of Assisi Church from 1973-1975, at St. Charles Borromeo Church from 1975-1978, and St. James the Greater Church from 1978-1979. These were all in Oklahoma City. From there he served as Administrator and then Pastor at St. Joseph Church in Ada from 1979-1986, as Pastor at St. Joseph Church in Blackwell from 1986-1988, and as Pastor at St. Gregory the Great Church in Enid and its Mission of St. Michael the Archangel Church in Goltry, from 1988-1997. He was then assigned as Pastor to St. Francis of Assisi Church in Oklahoma City from 1997-2002, and to St. Rose of Lima Church in Perry, with its Mission of Sacred Heart Church in Billings, from 2002-2012. Father Tom's final assignment before retirement was St. Mary Church in Ardmore from 2012-2018. During his tenure he served as Regional Vicar. In each parish Father Tom would discover the beauty of God's people and their willingness to serve their God and seek out the broken and broken-hearted. In the spirit of the Second Vatican Council and the Gospel, Father Tom would call forth the leadership of the baptized to serve the people of God. In the spirit of the prophets and of Christ himself, Father Tom would work for justice and embrace the migrant communities where he served. Father Tom's homilies were a source of comfort and conversion. Those who have a piece of his poetry know well of his fine command of the English language. Father Tom served on the Presbyteral Council of the Archdiocese for two terms, one of them as Chairman. In April of 2018, Father Tom's poor health required him to retire to St. Anne Assisted Living Center, Oklahoma City. And finally, in June of this year, Father Tom transferred to University Village in Tulsa, where he could enjoy visits with his family more conveniently. Father Tom was exceedingly grateful to the Archbishops with whom he has served in his ministry as priest: Archbishops Victor J. Reed, John R. Quinn, Charles A. Salatka, Eusebius J. Beltran, and presently Paul S. Coakley. Father Tom was preceded in death by his parents and infant first-born brother; and also by brothers-in-law Arnold Junger, and Father Thomas McSherry, as well as by several aunts and uncles. Father Tom celebrated his nieces and nephews: Matthew Dowdell and wife Jenny, Kathleen Dowdell Manning and husband Colin, John R. Dowdell and wife Molly, and Thomas J. Dowdell and wife Kelsey; Christina Hardway and husband Jim, Amy Putman and husband Steve, Philip Junger and wife Amy, Andrew Junger and wife Chelsea; Jack Dowdell, Joseph Dowdell, Edward Dowdell and Gabe Dowdell. These have blessed Father Tom with numerous grand nieces and nephews. Father Tom was a friend of Bill. The family acknowledges with thankful prayers the care provided Father Tom by the Archdiocese of Oklahoma City. This care was offered most clearly by Archdiocesan Nurse Susan Clem. Her competent and tender care for the infirm and retired priests of the Archdiocese is a blessing. The staff at St. Anne Assisted Living Center in Oklahoma City and University Village in Tulsa are to be commended for their service. We appreciate the material and spiritual blessings they offered. A Vigil Service will be held at Fitzgerald Funeral Services at 1402 South Boulder Avenue in Tulsa on Wednesday, November 11, at 7 p.m. A Funeral Mass will be celebrated on Thursday, November 12, at 10 a.m. at Christ the King Catholic Church in Tulsa with Archbishop Coakley presiding and San Antonio Auxiliary Bishop Michael Boulette preaching. Interment will be at Calvary Catholic Cemetery. Click for Live Stream If friends so choose, memorials may be made to Marquette, Bishop Kelly, or San Miguel Catholic Schools of Tulsa. Fitzgerald Ivy Chapel, 918-585-1151

The family of Thomas R. Dowdell created this Life Tributes page to make it easy to share your memories.

The Reverend Thomas Robert Dowdell
Priest of the Archdiocese...

Send flowers to the Dowdell family.