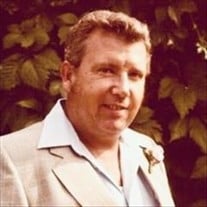 Ted was born on the outskirts of Tulsa County, in Lynn Lane Township, in an Oil lease house, on a lease maintained by his father. He was the second of four children. He made a few moves but continued to stay near Tulsa before ending up in Jenks and attending Jenks High School and graduating with the Jenks Class of 1955. After high school he worked drilling water wells with his father C.M (Mac) McGoingal, and they soon began to acquire oil leases. He left the oil business for a short while working for Spartan School of Aeronautics, Unit Rig in Tulsa as a welder, a gas station owner (DX on West Main in Jenks), a truck driver for Auto Convoy, and then finally back to his calling in the oil business when he bought a cable tool drilling rig in the early 70's, and started Ted McGonigal Drilling and soon added Production. He remained in Jenks for most of his life. He was a true oil man. He was born into the oil business and continued his business throughout his life. He left the drilling business when air rigs became more popular and faster, but continued his business producing oil with a few leases in Tulsa County. His business is now operated by his son, Kelly McGonigal. While in high school he met the love of his life, Ruby Beeler. They married June 20th, 1955 and later had two children, Theresa and Kelly. Ted and Ruby were married for 62 years before the passing of Ruby on May 25th 2017. He was preceded in death by his wife Ruby L (Beeler) McGonigal, parents C. M. (Mac) and Virginia (Davis) McGonigal, and his sister Kathy (McGonigal) Teakell. He is survived by his daughter Theresa L. (McGonigal) Dewhurst, and husband James V Dewhurst III, of Guthrie, Son Kelly W. McGonigal and wife Kirsten K. McGonigal, of Norman, 4 Grandchildren, Aaron McGonigal and wife Madonna, Chloe Dewhurst, Lacey Hardin, and husband Donovan, Aubrie Puffenbarger, 3 step Grand-children Ashton Johnson and husband Greg, Audra Plusquellec and Emma Plusquellec, 8 great grandchildren, and 2 brothers, Donald T. McGonigal, and wife Joan McGonigal, of Berryhill, and Danny McGonigal, of Skiatook. He died at home in Norman Ok on November 3rd, 2021, at the age of 85. He will be missed by many family members and friends, but we rejoice that he is home with Ruby who he has missed since her passing. The family would like to thank Alpha Hospice, and Jennifer Bebout, for their generous support in his final month. They were incredible with Ted. We could often hear Ted, the chaplain and social worker talking and laughing for hours. His aide Benjamin treated Ted with kindness and respect and the family always knew that when the Alpha team was here, they would leave with Ted's spirits high. Visitation will be at Fitzgerald Southwood Colonial Chapel, 3612 E 91st street South, Tulsa, OK on Wednesday, November 10th from 4-7 pm. A funeral service will be held at Beaver Street Southern Baptist Church, 102 W. Beaver Street, Jenks, OK on Thursday, November 11th at 1:00 pm. His final resting place will be Calvary Cemetery, next to his loving wife, Ruby.

Ted was born on the outskirts of Tulsa County, in Lynn Lane Township, in an Oil lease house, on a lease maintained by his father. He was the second of four children. He made a few moves but continued to stay near Tulsa before ending up in... View Obituary & Service Information

The family of Ted Wayne McGonigal created this Life Tributes page to make it easy to share your memories.

Ted was born on the outskirts of Tulsa County, in Lynn Lane Township,...

Send flowers to the McGonigal family.