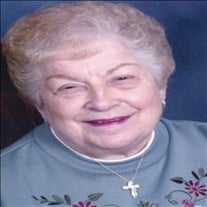 Theresa Ann Tomecek, a member of the Greatest Generation, died at age 92 on August 30, 2020 in Tulsa, Oklahoma. Born on February 1, 1928 to Carmela and Giuseppi Mattoni of Toledo, Ohio. Theresa was the fourth born of 5 children during the Depression. She was taken out of school during 10th grade to help provide for her family and care for her siblings. She married the one and only man in her life, Frank Joseph Tomecek, in 1949. They were together for 59 years and raised one "miracle" baby that she was not supposed to be able to have due to a severe childhood traumatic injury. Despite her limited education she earned a cosmetology license and was at the top of her class. She practiced this a number of years until she changed directions in life to work in the stock room at JC Penny's for 25 years. She sacrificed herself to give her siblings and her son a better life than she had. She was an extraordinary cook and no one ever left her table hungry. She was a devout Catholic living with her husband in Indianapolis for over 50 years, and they loyally attended Nativity Church. Tireless and constantly active she worked until she was 74 and lived independently until the last few days of her life. She lived for God, family and food. She was smiled upon by God, passing into his arms peacefully in her sleep. She was preceded in death by her beloved husband, her parents and all of her brothers. Theresa is survived by her child, Frank Joseph Tomecek Jr and his wife of Tulsa; five grandchildren, Sarah Cross, Katrina, Molly, Samantha and Rachel Tomecek and her great grandchild Juliette Cross. Visitation will be held on Wednesday, from 5-7 pm, before the service. A Memorial Service is planned at Southwood Colonial Chapel at Fitzgerald Funeral Service in Tulsa at 7 pm, Wednesday, September 2, 2020. In lieu of flowers, donations can be made to St. Jude's Hospital of Memphis, Tennessee.

Theresa Ann Tomecek, a member of the Greatest Generation, died at age 92 on August 30, 2020 in Tulsa, Oklahoma. Born on February 1, 1928 to Carmela and Giuseppi Mattoni of Toledo, Ohio. Theresa was the fourth born of 5 children during the Depression.... View Obituary & Service Information

The family of Theresa Ann Tomecek created this Life Tributes page to make it easy to share your memories.

Theresa Ann Tomecek, a member of the Greatest Generation, died...

Send flowers to the Tomecek family.