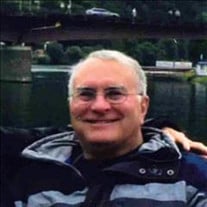 Thomas J. "John" Fowler, III, 75, of Tulsa, went to be with the Lord on Sunday, March 21, 2021. He was born on April 15, 1945, in Tulsa, the son of Thomas John Fowler, II, and Iva Nora (Cumberland) Fowler. On September 30, 1966, he married Marilyn Wiehe, in Sapulpa, OK. John had worked for 35 years at American Airlines, having most recently been a Managing Director, until his retirement in 2004. He was an avid motorcycle rider, and enjoyed traveling to many destinations around the world. He is survived by his wife, Marilyn Fowler, three children; Janet Terrero, Jean Carlisle, and her husband, Dean, and John Fowler, and his wife, Sheramee, grandchildren; Ali Carlisle, Hunter Carlisle, Jack Fowler, Jonathan Terrero, Michael Fowler, and Matthew Fowler, and numerous other extended family members, and friends. He was preceded in death by his parents, and sister. A funeral service will be held 10 a.m. Thursday, March 25 at Fitzgerald Southwood Colonial Chapel. In lieu of flowers, the family asks that memorial donations may be made in John's name to the Ronald McDonald House.

The family of Thomas John Fowler, III created this Life Tributes page to make it easy to share your memories.