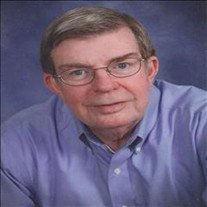 Thomas Daniel Sullivan died November 3, 2020 at his home in Tulsa. Dan was the son of Thomas D. Sullivan and Ann Sheehan Sullivan. Born in Tulsa in 1944, he grew up and attended Catholic schools from the first grade through college. His education began at Christ the King's school, Marquette, where he received an exceptional education by Benedictine nuns through his sophomore year. With the opening of Bishop Kelley in 1960, he then transitioned to the mindful eye of the Christian Brothers, graduating in 1962. The only bump in the road was a bout with polio in the summer before the fourth grade. He endured that episode, but his dreams of being a baseball player were shelved-he traded those for being a fan of the Milwaukee Braves. In fact, his choice of college was Marquette University in Milwaukee, Wisconsin. Dan graduated with a Bachelor of Science in Mathematics from Marquette in 1966. After two years' service in the U.S. Army, he began a work career as a computer programmer/system analyst with various organizations in Tulsa, Washington D.C., and Kansas City. His last job was with the Tulsa Public School system. Dan was preceded in death by: his parents; his sisters, Jane Sullivan Dee and Kathleen Ann Sullivan; and his aunts, Nell, Kathleen, Rosemary, and Dorothy Jane Sheehan, Mary Sheehan Leonard, and Jane Sullivan Jensen. He is survived by: his brother, Jack Sullivan; nephew, David Dee, his wife Sandy and their boys, Connor, Ryan and Josh; niece, Beth Dee; nephew, Kevin Dee, his wife Sarah and their boys, Sullivan and Joseph; nephew, Brian Dee his wife Ronda and their boys, Thomas and Charlie; as well as numerous cousins in the Sullivan and Sheehan families. The constant in Dan's life was his faith in God and family. His hope would be for others to keep those treasures close. Funeral Services will be Wednesday, November 25th at Calvary Cemetery Chapel, with a Rosary at 9 AM and Mass of Christian Burial at 10 AM. The family will receive friends between the rosary and the mass times. In lieu of flowers, please donate to the Bishop Kelley Tuition Assistance Program. Fitzgerald Ivy Chapel, 918-585-1151

Thomas Daniel Sullivan died November 3, 2020 at his home in Tulsa. Dan was the son of Thomas D. Sullivan and Ann Sheehan Sullivan. Born in Tulsa in 1944, he grew up and attended Catholic schools from the first grade through college. His education... View Obituary & Service Information

The family of Thomas Daniel Sullivan, Jr. created this Life Tributes page to make it easy to share your memories.