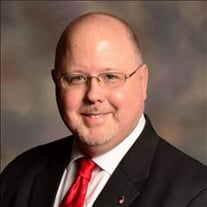 Troy Kent Snow, aged 51, died in the arms of his wife on August 13th, 2021 after a valiant battle with COVID-19. Troy was born March 12th, 1970 in Minot, ND at the USAF Regional Hospital to Billie and Martin (Duke) Snow. Soon after the family... View Obituary & Service Information

The family of Troy Kent Snow created this Life Tributes page to make it easy to share your memories.

Send flowers to the Snow family.