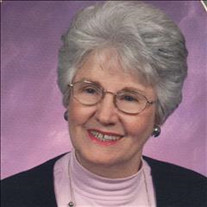 Virginia "Ginger" Anne (Mannas) Dickson left this Earth to enter her Heavenly home on February 5, 2022. Ginger was born on May 5, 1931, in Tulsa, Oklahoma, to the union of Cletus and Anne (Leonard) Mannas. Ginger graduated from Marquette High School in Tulsa, Oklahoma, and continued her education at Mount Saint Scholastica in Atchison, Kansas. Following her education, Ginger settled in Dallas, Texas, where she met Edward "Ed" Neil Dickson. Ginger and Ed married on June 27, 1970. The couple resided in Virginia and Alabama before eventually settling in Edward's hometown of Wauconda, Illinois, to run the Dickson family apple orchard. Ginger compassionately cared for Ed's late mother while learning and embracing the skills and commitment it took to run an orchard. Ginger, a devout Catholic, quickly became a stalwart of her church and community. Her gentle personality would shine when school children and families would frequent the orchard to pick apples. In 1999, Ginger sold the orchard, returned to Oklahoma, and built a home in Broken Arrow. Not one to stay complacent, Ginger immediately jumped into her new retirement role. She spent her time socializing, traveling, volunteering, and spending time with her family. Ginger's philanthropic passion was on full display as a board member of the Assistance League of Tulsa, where she was able to help transform the lives of children and adults through community programs. Throughout her life, Ginger always relied on her faith for guidance and strength. Ginger is preceded in death by her husband Edward Dickson; stepson Andrew Dickson; sisters Margie Wood and Ellen Edwards, and brother Leonard Mannas. She is survived by stepdaughters Elana Grissom of Tulsa, Risa Dickson of Honolulu, and Mariah Dickson of Colorado; grandchildren Jacob Murdock (Cynthia), Taylor Bliszcz, Ashley Bliszcz, Eliza Stein, Rebekka Dickson, Benjamin Dickson, Max Stein, Gabrielle Dickson; 4 great grandchildren and many adoring nieces, nephews, and extended family members. Donations in Ginger's memory may be made to The Assistance League of Tulsa (www.altulsa.org) or to the Alzheimer's Association (www.alz.org).

Virginia "Ginger" Anne (Mannas) Dickson left this Earth to enter her Heavenly home on February 5, 2022. Ginger was born on May 5, 1931, in Tulsa, Oklahoma, to the union of Cletus and Anne (Leonard) Mannas. Ginger graduated from Marquette High... View Obituary & Service Information

The family of Virginia A. Dickson created this Life Tributes page to make it easy to share your memories.

Send flowers to the Dickson family.