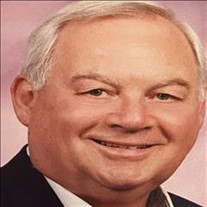 William Rocco Danzi "Bill" age 85 of Tulsa, OK passed away Thursday, February 25, 2021. He was born on September 16, 1935 in Syracuse, NY to Vito and Helen Danzi, and was an only child. The family moved to Binghamton, NY when he was one year old. He attended St. Mary's Catholic School thru 8th grade and graduated from Binghamton North High School in 1953. He was a very talented athlete excelling in both basketball and baseball. At 16 years old, he received a letter from the NY Yankees to tryout, but he turned it down hoping for a career in basketball instead. He enlisted into the Army in 1955 and served in the Korean War for 2 years. After returning home, he married the love of his life, Concetta Jean Lovaglia on November 16, 1957, and were happily married 63 years. They raised 7 children: Billy, Kelly, Robert, David, Caryl, Cheryl and Matthew. He spent 20 years in Binghamton employed by Link. In 1973, the family moved to Tulsa, OK for employment with Atkins & Merrill (Flight Safety). He spent 10 years with Flight Safety as a Project Manager. In 1986, Bill moved to California where he worked for Northrop on the B-2 stealth bomber. A year later, Connie joined him and they enjoyed their time together in sunny California sightseeing and walking the beaches. Their next move was to Arlington, TX working for Hughes-Raytheon for the next 9 years. In 2000, they moved back to Tulsa to be closer to their family. He continued working in the simulation industry until he retired at 70. He was a devout Catholic and man of faith. His family and friends were the most important things to him. He enjoyed cooking for family and friends and will mostly be remembered for his homemade pizza and spaghetti sauce. He was preceded in death by his parents, Vito and Helen Danzi and unborn child. He is survived by his wife Connie; son Bill and granddaughter Sara; daughter Kelly; son Robert and wife Oleta, grandson, Joshua and great grandson Mario; son David and wife Liana, grandson Jacob and granddaughter Danielle; daughter Caryl Driscoll and husband Bryan, granddaughter Morgan Bird and husband Travis and great grandson Bryan and grandson Rocco; daughter Cheryl Chapman and husband Brian and grandsons Andrew and Tony; son Matthew and wife Reiko and grandson Nick, granddaughter Christina Martinez and husband Joey, and grandson Jonny. In Leiu of flowers memorial donations may be made in Bill's name to St. Jude's Children's Research Hospital website

William Rocco Danzi "Bill" age 85 of Tulsa, OK passed away Thursday, February 25, 2021. He was born on September 16, 1935 in Syracuse, NY to Vito and Helen Danzi, and was an only child. The family moved to Binghamton, NY when he was one year... View Obituary & Service Information

The family of WILLIAM R. DANZI created this Life Tributes page to make it easy to share your memories.

Send flowers to the DANZI family.