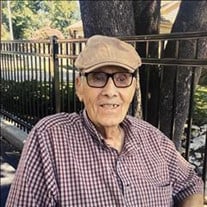 William Mack Kelly, 96, of Tulsa, died on Thursday, June 18, 2020. He was born on December 30, 1923, in Muskogee, Oklahoma to William Henry and Helen (Baker) Kelly. He was in the United States Army from 1941-1945 and served in Europe as a truck driver. He and both of his brothers, Sam and Buck, were also stationed in the Army at the same time. Mack survived the landing on Omaha Beach at Normandy, France on D-Day, December 7th, 1941. He was honored to receive the American Service Ribbon, American Defense Service Ribbon, EAME Campaign Service Ribbon, and three bronze Service Stars. Upon his discharge from the military, Mack, his brothers, and their father began a painting business that they operated for many years. Mack traveled all over the country painting post offices for the federal government. Mack later sold road equipment, then became a bail bondsman. He opened an office across the street from the Okmulgee County Courthouse and operated his business there. His career lasted for more than 50 years. He loved to work and didn't retire until the age of seventy-five. He enjoyed participating in the political arena, actively campaigning for his favorite candidates over the years. Campaign season found Mack organizing events, putting up signs and making sure voters made it to the polls to vote. Election nights were often spent at his home with friends gathered around the television watching election returns. He loved his home in Tulsa, and his sunroom. He enjoyed playing cards, and dominos. He read the newspaper daily. He especially loved the weekends when Dave, his son, would bring McDonald's coffee, and sausage biscuits. He is survived by his daughter; Karla Gieber, and her husband, Andy, of Emporia, Kansas, sons; Phillip Mack Kelly, of Newton, Kansas, and David P. Reid, and his wife, Charlene, of Tulsa, Oklahoma, grandchildren, Matthew Gieber, of Emporia, Kansas, Melanie and Eric Kelly, of Newton, Kansas, Brett Reid, of Tulsa, Oklahoma, and eight great-grandchildren. He was preceded in death by his wife, Anna Kelly in October of 2018. They were married for fifty-one years. He was also preceded in death by his parents, his two brothers; Sam Kelly and Buck Kelly, sisters; Irene Mooney, Dorothy Kelly, Mary Kelly, and Juanita Cramp, all of Muskogee, Oklahoma and his grandson, Matt Reid of Tulsa. In lieu of flowers, please send memorial donations to St. Jude Children's Research Hospital, Memphis, TN (stjude.org) in memory of his grandson, Matt Reid.

The family of Mack Kelly created this Life Tributes page to make it easy to share your memories.

Send flowers to the KELLY family.