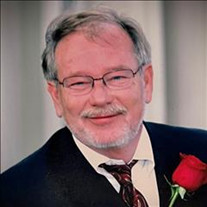 Walter Lewis Lambert, age 70, died peacefully on May 27, 2022 in Tulsa, Oklahoma. He is survived by his wife, Susan Richmond Lambert; son William Grantland, wife Brenna, and their three children, Gavin, Gage, and Brielle of Carrolton, TX; son Adam Michael, his wife Miranda, and their children Roman and Canon of Tulsa; and siblings, Dr. Gary Lambert of Muskogee, Scott Lambert of Muskogee, and Lisa Hostetler of Bentonville, AR. He was preceded in death by his first wife, Laura Ann (Connell) Lambert. Walt was born January 10, 1952 in Mountain Home, Arkansas to parents William H. and Octavia C. Lambert. Growing up in Muskogee, he was active in the Trinity Methodist Church choir, became an Eagle Scout, and graduated in 1970 from Muskogee High School. He furthered his education by a obtaining a Bachelor of Science Degree in Civil Engineering from the University of Arkansas in 1978 and was a member of the Phi Delta Theta Fraternity. While living in Muskogee, Walt worked with his father at Wilolamb International Corp. He purchased Wilolamb from his father and continued operating the company for the remainder of his career. Walt was an active member of his community in Muskogee as a member of Trinity United Methodist Church, The Rotary Club, The Exchange Club, and he served on the Board of Directors of the Muskogee City-County Port Authority for many years. Early in his career he discovered his passion for parallel wire cable (PWC) suspension bridges. He holds 15 U.S. patents on steel cable design. His bridge work includes: the renovation of the Royal Gorge Bridge in Canon City, Colorado, 1980-1984; the 1997 restoration of the Regency Suspension Bridge; the 2005 rebuild of the Beveridge Suspension Bridge, San Saba County, Texas; the Roma-Ciudad Miguel Aleman International Bridge, Roma, Texas, a US National Historic Landmark. Funeral services will take place on Tuesday, 31 May, at Fitzgerald Southwood Colonial Chapel. Viewing for the family will be 2:00-3:00 pm, with the service at 4:00 pm. In lieu of flowers, donations can be made to the Arthritis Foundation or JDRF (Juvenile Diabetes Research)

The family of Walter Lewis Lambert created this Life Tributes page to make it easy to share your memories.

Send flowers to the Lambert family.