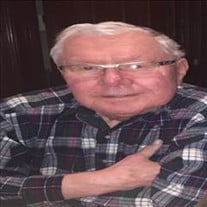 Walter F. Sanders, 82, of Broken Arrow, Oklahoma died Thursday December 17, 2020 in Tulsa. Walt was born on February 9, 1938 in Corry, Pennsylvania to Frank and Teresa Mazgay Sander. He was the youngest of 13 children and joined his family working the family farm. He attended Mount Union College in Alliance, Ohio and received a Bachelor of Science degree. After graduation Walt moved to Santa Monica, California and began working at Stillman Rubber Company as a chemist. In Santa Monica he met and married Dora Fierro, giving her the nickname "Doby", which she still goes by. In 1966 Walt started working at Da/Pro Rubber as a chemist, after years in the laboratory, he became a salesman, which gave him the opportunity to travel the world, often with his wife Doby. Walt retired as COO from Da/Pro Rubber, Inc in 2016 after 50 years of service. Walt and Dora were married in July of 1962 at the St. Anne's Shrine in Santa Monica, California. They had 3 daughters, Kateri, Daria and Anne and 1 son Duane. They lived in Santa Monica until 1967 when the family moved to Hawthorne, California. While living in Hawthorne Walt was a member of St. Joseph Catholic Church where he was very involved in the parish. He was also a member of the church choir. In 1984 Walt moved with Doby and Duane to Broken Arrow, Oklahoma where he found a place to live that he loved, with land, lots of trees and a place to grow his beloved garden. He was a parishioner of St. Anne's Catholic Church, which seemed fitting since St. Anne held a very special place in his heart. Walt was a member of the Knights of Columbus and a lector for mass. Walt was preceded in death by his parents, four sisters, Ann Gluvna, Mary Spitman, Mickey Tomcho and Elizabeth Sander (an infant); five brothers Robert, Constantine, Joe and Stanley Sander (an infant) and Stanley J. Sander, who died at 92 in September 2020. In addition to his parents and siblings, he was preceded in death by his oldest daughter, Kateri Anne Sanders, who died in 1976 at the age of 13. Walt is survived by his wife, Dora "Doby" Fierro Sanders, two daughters, Daria Blocker and her husband Vince, Anne Fell and her husband David; one son, Duane Sanders and his wife Katie; one sister Sophie Girovsky of Corry, PA, two brothers, Pete Sander of Corry, PA and John Sanders and his wife Ilsa of LaPorte, TX, and a sister-in-law, Faye Sander of Erie, PA. He is also survived by 6 grandchildren, Lauren O'Neill and her husband Brad, Zachry Williams and his wife Melissa, Nicholas Perez, Natalie Nickel and her husband Andrew Campbell, Patrick Nickel and MIchael Nickel; and 4 great grandchildren, Hali Williams, Gavin Willams, Benjamin Campbell and Rory Campbell; and many, many nieces and nephews. The funeral rosary, mass and burial will be held on Tuesday, December 22, 2020 at 10:00am at Calvary Cemetery, Tulsa, Oklahoma. There will be a private service for immediate family only. Funeral arrangements are under the care of Fitzgerald Southwood Colonial Funeral Home, 3612 E. 91st Street South, Tulsa, OK 74137.

Walter F. Sanders, 82, of Broken Arrow, Oklahoma died Thursday December 17, 2020 in Tulsa. Walt was born on February 9, 1938 in Corry, Pennsylvania to Frank and Teresa Mazgay Sander. He was the youngest of 13 children and joined his family... View Obituary & Service Information

The family of Walter Frank Sanders created this Life Tributes page to make it easy to share your memories.

Send flowers to the Sanders family.