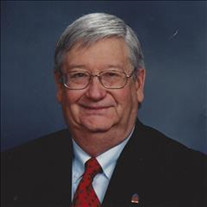 Wayne Woodrow Frenier, widower and beloved father of two children passed away at age 80 on Sunday April 24th, 2022 in Tulsa, Oklahoma after an extended fight with cancer. Wayne was born in Washington, D.C. on March 15, 1942 to William and Ruth (Collins) Frenier. He graduated from high school in 1959. He received a BA in Chemistry from Catholic University of America in 1963. He then continued his education at the University of Chicago, where he received a Masters in Chemistry in 1965. Wayne met Dolores on a young adult Catholic ski trip. They married on August 18, 1973 in Michigan. She proceeded him in death almost exactly one year ago. They both passed on a Sunday to be reunited in heaven. Wayne grew up in the Washington, DC area. He had one younger brother, Dennis. Following graduate school in Chicago, he was commissioned a second lieutenant in the US Air Force. He was in ROTC while he was in college. During his Air Force service, he was stationed in New Mexico, Colorado, and Cam Ranh Bay, Vietnam, where he received a Bronze Star. After being honorably discharged as a Captain in 1972, Wayne began a prestigious career as a researcher and inventor in chemistry. He worked for Dow Chemical and Schlumberger in Midland, Michigan, Tulsa, Oklahoma and Houston, Texas. Wayne held approximately thirty US Patents for various chemical compounds related to chemical cleaning and oilfield services. He authored numerous technical papers that he presented internationally. He would bring home stamps from around the world from requests for copies of his papers (pre-email and internet). He retired from corporate life in 2004. After retirement, he authored six oil field chemistry related technical books that were published by technical societies NACE International and SPE. When he wasn't writing technical books, he volunteered with the Gillies at Gilcrease Museum in Tulsa. He thoroughly enjoyed volunteering there, especially with the anthropology group, where he met several very close friends. He relished looking at artifacts that most people will never see, since the Gilcrease collection is extensive. Wayne loved having grandchildren and following them around to their various activities like dance recitals, sporting events, plays, and school events. Wayne is proceeded in death by his wife Dolores, his parents William and Ruth, and his brother Dennis. He is survived by his son Andrew of Tulsa and wife Dr. Renee Frenier, daughter Kathleen of Tulsa and husband Dr. Scott Turner, his grandchildren, Isabella, Maggie, Genevieve, and Oliver, and numerous nieces and nephews. A special thank you to several close friends who transported him and shared meals with him while he was fighting cancer during the last year. He cherished those moments. Also, a thank you to the various doctors and medical staff who were treating him, as well as his caregivers at Montereau. There will be a Rosary on Friday, May 6, 2022 at 12:30 pm with the Funeral Mass to follow at 1:00 pm at the Church of the Resurrection in Tulsa, OK. Address is 4804 S Fulton Ave Tulsa, OK. Donations may be made to American Cancer Society or a charity of your choice.

Wayne Woodrow Frenier, widower and beloved father of two children passed away at age 80 on Sunday April 24th, 2022 in Tulsa, Oklahoma after an extended fight with cancer. Wayne was born in Washington, D.C. on March 15, 1942 to William and... View Obituary & Service Information

The family of Wayne Woodrow Frenier created this Life Tributes page to make it easy to share your memories.

Send flowers to the Frenier family.