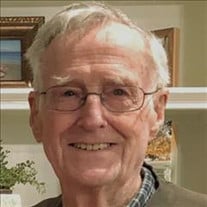 Crawford "Wayne" Woody, 88, of Jenks, OK, passed away on Monday August 23rd, 2021. Wayne was born in Effingham, Illinois, on October 2, 1932. He was raised on the family farm by his parents, Ross and Pauline Woody, along with his brothers, Gene and Larry. Friends and family know Wayne was an enthusiastic graduate of Effingham High School, where he ran track and led the marching band as Drum Major for the Effingham Flaming Hearts. He proudly served in the US Army and went on to receive his bachelor's degree in accounting from the University of Illinois. He proceeded to Tulsa, where he earned his law degree from the University of Tulsa. Wayne practiced law privately in Tulsa until retirement. Wayne married Claudia Parnell Patton in 1975, marking their 46th wedding anniversary recently. They enjoyed taking trips and cruises with family and friends. Wayne and Claudia raised four children: Scott (Julie) Woody, Austin, TX; Joel Woody, Tulsa, OK; Laura (Mike) Burns, Broken Arrow, OK; and Clay (Leigh) Patton, Nashville, TN. Wayne was also a generous, loving and supportive grandfather to Cody, Brooke, MayPearl, and Henry. He is survived by his loving wife, children, grandchildren, his brothers, Gene Woody, of Texarkana, Arkansas, and Larry Woody, of Orange, California, and many nieces and nephews. Wayne Woody will be remembered fondly for his social and outgoing nature. An affable, inquisitive, and sometimes boisterous conversationalist, Wayne was always ready to offer advice and engage in debate. For decades, Wayne enjoyed the company of a casual but dedicated group of friends and colleagues who met at the Quality Inn for coffee and breakfast. Wayne was an unabashed and devoted Sooners fan in a decidedly Cowboys family. He was happiest when he was outside working in his garden with Brooke and Cody. He was never without a woodworking or home improvement project. Wayne was a fierce canasta player, and enjoyed playing chess and canasta with his family, reading mountains of books, watching documentaries, and savoring any available delicious meal. A celebration of Wayne's life will be held on Saturday, August 28, from 2:00 to 4:00 PM at Fitzgerald Southwood Funeral Home Family Center, 3612 E. 91st Street South, Tulsa, OK 74137. In lieu of flowers, the family requests that donations be made in Wayne's honor to the American Cancer Society . https://www.cancer.org/involved/donate/memorial-giving.html

Crawford "Wayne" Woody, 88, of Jenks, OK, passed away on Monday August 23rd, 2021. Wayne was born in Effingham, Illinois, on October 2, 1932. He was raised on the family farm by his parents, Ross and Pauline Woody, along with his brothers, Gene... View Obituary & Service Information

The family of Wayne Woody created this Life Tributes page to make it easy to share your memories.

Send flowers to the Woody family.