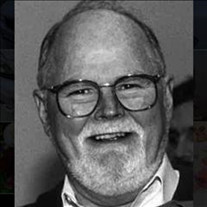 William "Bill" Mahoney passed away peacefully in his home on April 19, 2022. Born in Tulsa, OK on July 5, 1925, to Mr. and Mrs. M.G. Mahoney, Bill was a star athlete playing football and as much baseball as they would let him. Bill found lifelong friendships and graduated from Cascia Hall. Bill answered the call to serve in the Pacific Theater during World War II at 17-years-old. Bill served nearly three years, spending 23 months working as a master at arms in New Guinea on a field hospital for those wounded in action. After Bill returned to Tulsa, he married Norma Jean "Corke" in 1946. Soon welcoming a son, William Jr., and then a daughter, Carol Anne. Bill still nurtured a deep passion for sports playing semi-pro baseball and softball locally. He later turned into an avid golfer achieving not one but two holes-in-one (He would giggle to know we told everyone that). He retired in 1993 after serving as Director of Calibration Services for Rockwell International Aircraft and took to his job like a duck to water. Bill possessed a deeply meticulous nature that manifested in fixing watches � he would tell people he was a "Horologist" just to see their expression � and making custom frames as a skilled carpenter. He loved fixing things and helping people. Bill and Corke built a wonderful life in the Catholic faith together with many friends and family. He remained a loving husband to Corke until her passing in 2014 after 67 years of marriage. Bill's later years were some of his most enjoyable, making many new friends at the Country Club of Woodland Hills. Bill loved embracing new experiences like Cry Baby Hill and professional wrestling (Just kidding about the wrestling. He'd giggle while shoving us in the ribs for saying that). He was a devoted grandfather, known as Pa, to Andrew, Dax, Sydney, Zach and Abagail and a loving great-grandfather to Tyler and Braden. He was a steady presence for his family in the wake of his daughter's passing in 2016. He was preceded in death by his parents, sister Mary Jane, and brothers Bobby and Don. Bill is survived by his son Will and his wife Katherine Battenberg, grandchildren, great-grandchildren Tyer and Braden and many nephews and nieces. Bill left this existence regretting one, single thing: missing the upcoming PGA Tournament at Southern Hills (He'd giggle at this too while nodding in agreement). His family finds comfort that he lived a life full of blessings and joys and friends and love. Thank you to everyone for their outpouring of love and support. We were truly blessed and lucky to enjoy Bill in our lives as long as we did. God speed, Pa. We love you.

William "Bill" Mahoney passed away peacefully in his home on April 19, 2022. Born in Tulsa, OK on July 5, 1925, to Mr. and Mrs. M.G. Mahoney, Bill was a star athlete playing football and as much baseball as they would let him. Bill found lifelong... View Obituary & Service Information

The family of William Michael Mahoney, Sr. created this Life Tributes page to make it easy to share your memories.

William &quot;Bill&quot; Mahoney passed away peacefully in his home on...

Send flowers to the Mahoney family.