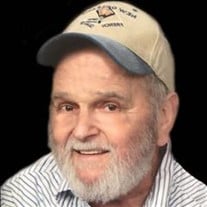 William Page Nole was born January 9, 1936 to Edward Francis and Violet Irene Nole in Belle Vernon, Pennsylvania. His family included four brothers and one sister. He was preceded in death by brothers Jack Nole, Edward Nole, Charles Nole and sister Shirley Mullinax. His remaining brother, Robert, resides in the Tulsa area. Mr. Nole leaves behind his wife of more than 60 years, Barbara Ann Nole, as well as four children William, Jr., Mary, Edward and Jack Nole, all of Tulsa. He also had the pleasure of eight grandchildren by birth and marriage, including William Nole III, Jeff Dickason, Ellen Nole and Molly Dickason, along with Houston Nole, Madison Gustin, Emily Nole and Ashlyn Gustin. Houston and his wife Samantha are the parents of Mr. Nole's two great-grandsons, Milo and Dexter. Raised in a musical family, Bill was an accomplished fiddle player and performed with the family's band, the MerryNoles, at large and small venues. After moving to Florida from Pennsylvania, Bill and his siblings performed at the famous bandstand on Daytona Beach. The family moved to Tulsa in the 1950's and Bill attended Will Rogers High School. It was there he met the love of his life, Barbara Ann Siemer. The two dated while Miss Siemer studied to be a nurse at Hillcrest Hospital. During this time, Bill served in the Oklahoma contingent of the Air National Guard and worked as an orderly in surgery at Hillcrest. Bill and Barbara were married in January, 1958 in Tulsa. Bill worked as a night auditor at several Tulsa hotels in the sixties. His proudest post was at the palatial Camelot Hotel, where he enjoyed making the acquaintance of many musical entertainers when they passed through town. Leaving the hotel industry behind him, Bill started his own successful demolition company. Bill Nole Wrecking Company. Over the course of his career, Bill took down buildings in Tulsa and across northeastern Oklahoma, clearing the way for much of the inner dispersal loop around downtown Tulsa. Bill and Barbara enjoyed traveling, especially to Branson and Daytona Beach. He continued to love music and attended concerts by Floyd Cramer, Danny O'Donnell and the Lawrence Welk Orchestra among others. Bill was an accomplished photographer and a great civil war buff. He often combined the two interests by photographing civil war reenactments. Those who knew him remember Bill as a good man who went out of his way to help others. He had a playful sense of humor, a strong faith and a boundless love of his family. With his arrival, the MerryNoles can play together once again, making a joyful noise in Heaven.

The family of William Page "Bill" Nole created this Life Tributes page to make it easy to share your memories.

Send flowers to the Nole family.