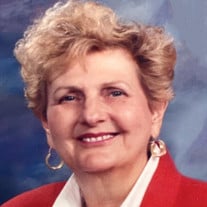 Yvonne Mary Grewe, born in Pittsburgh, Pennsylvania, was a model for women who dared to envision a married life full of love, children, civic engagement, executive power, religious devotion, and genuine friendships. A feature writer from the Tulsa World said Yvonne combined "the exuberance of a cheerleader, the authority of a drill sergeant, and the patience of a Cub Scout Den mother with expert management skills." Yvonne graduated from high school as a Midwest City Bomber and attended Benedicitine College where she met her husband, Edmund Grewe. They really became a couple when Edmund was in the Navy and stationed in Norman, Oklahoma. Yvonne's letters found Edmund on aircraft carriers around the world before the couple decided to spend the rest of their lives together. The couple settled in Tulsa, Oklahoma, with their five children, and Yvonne became the first employee and the second executive director of Youth Services of Tulsa where she was instrumental in opening the area's first shelter for runaways. Yvonne was as committed to her family as she was to her career, and everyone who knew how hard she worked admired that she also kept an immaculate home filled with laughter and lively discussions. Always sharply dressed, Yvonne was known to juggle a recipe for Christmas fudge with a stack of college textbooks and an agenda for her volunteer work with Christ the King Parish. While her five children were still in grammar school, she earned a bachelor's degree in Criminology and a master's degree in Administrative Leadership. Modern for her time, Yvonne struck many as a force of nature who wanted to earn influence so that she could help others achieve their goals. Her unyielding Catholic faith and her unparalleled knack for organization made it possible for Yvonne to combine a successful career with a huge family� kids, grandchildren, and a great-grandson� and a once in a lifetime marriage to her true love. Yvonne was devoted to her friends whom she always regarded as family, and her calling was to encourage all with whom she spoke to follow their dreams, develop their intellect, and take time to serve others. To illustrate her drive to work in the wider Tulsa community, Yvonne quoted her Irish grandmother, saying, "You can't keep love in the home because it oozes out the windows." That was a lesson that she integrated fully, teaching us that love was never finite, that as long as you have love to give, you will always have more and more love to keep giving. In lieu of flowers, the Grewe family notes that Yvonne would love for you to donate to Catholic Charities of Oklahoma and/or Youth Services of Tulsa. Visitation will be at Fitzgerald Ivy Chapel, from 12 noon until 5 pm, Thursday, January 14, 2020. Funeral Mass is private, but you may join via livestream. Here is the private link for anyone who wishes to view the stream: The live stream will begin at 12:45 p.m. Friday, January 15th, 15 minutes prior to the beginning of the funeral so that guests have the chance to get settled before the funeral begins. Fitzgerald Ivy Chapel, 918-585-1151

The family of Yvonne Mary Grewe created this Life Tributes page to make it easy to share your memories.

Yvonne Mary Grewe, born in Pittsburgh, Pennsylvania, was a model...