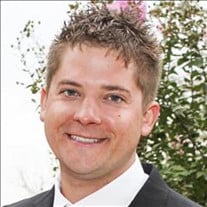 Zachary: Hebrew - God Has Remembered; Humble Before God. The funeral mass to honor the life of Zachary David Plunkett and pray for the repose of his soul will be held at 10:00 a.m. Tuesday, December 22 at St. Bernard of Clairvaux in Tulsa, Oklahoma. The final resting place for his cremains will be the Columbarium of Marian Chapel located inside the Church. Zachary David Plunkett entered eternal life on December 12th, 2020 at the age of 35. He was born in Oklahoma City on May 23rd, 1985 as the second of five children and oldest son to David and Sarah Plunkett, nee Greuel. Zach was baptized at Assumption Church in Muskogee, Oklahoma and completed all other sacraments at St. Bernard of Clairvaux in Tulsa, Oklahoma. He began his early elementary education at Sycamore Grade School, in Upland, California, then attended Jenks Public Schools (1992-2004). Zach was very proud to be a Jenks High School Graduate and enjoyed studying Petroleum Geology at Oklahoma State University! Zach was an outdoorsman with a natural love for the earth and all its rock formations, plants, and animals. He enjoyed playing soccer and football and camping with the Boy Scouts. He was a hardworking son and brother. Zach learned to drive a tractor at age 12 and planted many trees on the property surrounding his family's home. He built up a lawn maintenance business that included custom lawn-mowing, pruning bushes, trimming trees and leaf removal. Through his entrepreneurship, Zach employed his younger brothers: Ethan and Jared, and role-modeled a strong work ethic. Despite incessant teasing, Zach deeply admired the ongoing achievements of his sisters: Kristie and Audrey as well as his brothers. He liked to say, "Hang out with Dad if you want to have more fun but when you really need something done, ask Mom." Zach always had a special bond with the family pets, including their beloved white labs, "Ben" and "Puppy" and his favorite cats, "Rat", "Tuesday", "Teddy", "Orange Kitty", and a polydactyl named "Terradactyl". He had a beautiful baritone voice, often singing along with his favorite pop and country music songs. He also appreciated home-cooked meals, especially when mashed potatoes with gravy, and pie were involved. He made sure there were very few leftovers! Zach will always be remembered by family and friends for his incredible charm, mischievous sense of adventure and trademark sparkle in his eye. He was often the life of the party and never met a stranger. Zach was his Dad's shadow and loved spending time with his aunts, uncles, and cousins in Muskogee, Oklahoma, where he learned to hunt for white tail deer, fish for big mouth bass and explore the great outdoors! He considered his Godparents: Christina and Phil Plunkett his second Mom and Dad. Zach and his cousins: Kevin Plunkett and Scott Wilson, were inseparable. He treasured numerous hunting trips with them near Clayton Lake in Southeastern Oklahoma. Left to love and cherish his memory are his parents, Sarah, and David; sister Kristie and husband Dustin Hartle; brother Ethan and wife Kaylie; sister Audrey; brother Jared; nieces: Charlotte, Hadley and Heidi Hartle; nephew, Noah Hartle; and a multitude of aunts, uncles, double-cousins and cousins. We pray you have found true joy Zachary and until we meet again may God hold you in the palm of his hand! In lieu of flowers, please consider donating to your favorite charity.

Zachary: Hebrew - God Has Remembered; Humble Before God. The funeral mass to honor the life of Zachary David Plunkett and pray for the repose of his soul will be held at 10:00 a.m. Tuesday, December 22 at St. Bernard of Clairvaux in Tulsa,... View Obituary & Service Information

The family of Zachary David Plunkett created this Life Tributes page to make it easy to share your memories.

Zachary: Hebrew - God Has Remembered; Humble Before God.
The...

Send flowers to the Plunkett family.